Home > Blog > Marketing > SEO > Get your site into high gear, ready for the Google Speed update

Get your site into high gear, ready for the Google Speed update

It’s been so long since Google released the aptly named Mobilegeddon update, all the way back in April, 2015. However, since then things have been relatively quiet on the Mobile SEO front. Yes, we had the release and push of AMP pages, and Google Maccabees incorporated some Mobile algorithm changes, but so far, we’ve been in the calm before the storm that is the Mobile-First Index.

All of that is set to change very soon!

At the end of January, Google announced an up and coming algorithm update; Google Speed – and when Google actually takes the time to pre-warn you about an update, you know it is going to be big. The last two times this happened were Mobilegeddon itself, and the aforementioned Mobile-First Index. Both of these were massive changes in the SEO landscape, so expect Google Speed to be the same!

What Can We Do To Protect Ourselves?

Thankfully, it’s not all doom and gloom. Google Speed is an update that will target something Google has been banging on about for ages now; Page Load Speed. This is something that we’ve been working with our clients on for so long now that it is basically embedded in our brain, and it should be the same for all of you.

In essence, you need to make sure your website is as fast as possible across all devices, not just Desktop. That means you need to be looking at how long your pages take to load on Mobile and Tablet devices, and fixing any issues accordingly.

There are a few tools out there that have been around for a while now and are specifically designed to help with this;

These tools are just the tip of the iceberg, as there are various different tips and tricks that can be implemented to bring your page speed down. Starting with these tools is the best idea, but as of now, Google has released a new set of tools to help even further!

In order to help you get your website performing even better, Google has just released the “Winning With Google” Mobile Speed Scorecard. 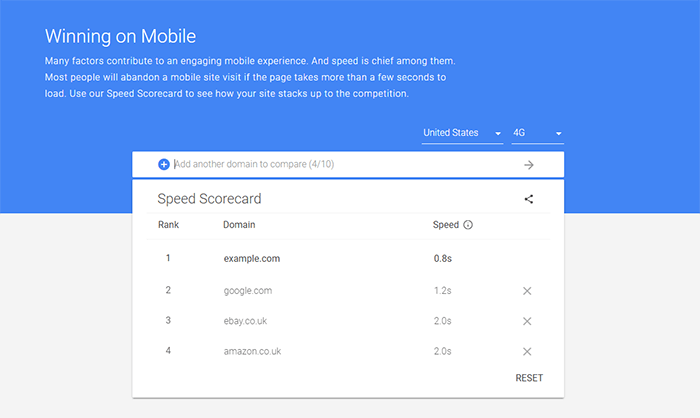 As you can see from the screenshot above, it is basically a comparison tool that allows you to determine how fast you are against your competitors. This is an incredibly useful tool for working out just how much work needs to be done to put you ahead of the game.

You can select which country you want to run the test from, and what connection type as well, meaning that you’ll get a very accurate result on how fast your website actually loads. This is a great indicator of where you stand, allowing you to put a plan in place on how to tackle pagespeed issues. 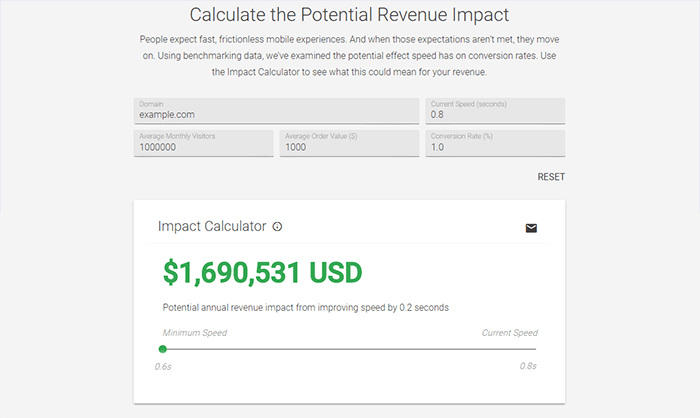 If the Score Card wasn’t enough, part of the same tool (just scroll down a bit further) is the Impact Calculator. By entering your domain into the tool, as well as your average monthly views, average order value and conversion rate, you’ll be able to see how much of an impact a fast load speed could have on your revenue! This is a hugely powerful tool, as it can help people to understand the important of page load speed.

It also helps you estimate the return on investment you’ll get for all the hard and tiring work that goes into making a website as fast as possible!

It’s Time To Get Ready

If you haven’t been working on your pagespeed yet, or if you’ve been putting it off in favour of other changes to your website, no is the time to get started. We don’t have long until Google Speed hits our digital shores (July this year), so you need to put a plan in place as soon as possible!

That way, when Google Speed finally lands, you’ll reap the rewards, rather than plummet into the abyss of Page 3 of the Search Results and beyond.

Increasing your page load speed can be a major undertaking, though, so if you need help or advice on how to do it, we are more than happy to discuss your options. So why not get in touch today and start down the path to a better website, more traffic, increased conversions and, most of all, being protected from Google Speed?

Light-Mode vs Dark-Mode: The Web Design and Development Debate

Over the last few years, web designers and development agencies are seeing more and businesses request a “dark mode” feature for their websites. Since two of the biggest tech giants, Apple and Google, have implemented a dark theme as an essential part of their User Interface, it hasn’t taken long for others to follow suit. …

How Can Conversational Marketing Be Used For Ecommerce Growth?

It’s no secret that communication is key when it comes to sales. A customer needs to be able to know and trust you and your brand before making that purchase. And, of course, brands have been conversing with their customers for years so conversational marketing isn’t anything new! But why are eCommerce growth agencies and …