As of today (15th February 2018) Google will be switching on its “Chrome Filtering” aka ad blocker, a move that will dramatically reduce the number of adverts used by publishers. With Chrome now holding 58.4% of the browser market, it is clear this will have a huge impact.

Not all adverts will be wiped out, only the ones considered bad practice by the Coalition for Better Ads. Pop-up ads, full screen scroll over ads, large sticky ads and autoplay video ads which feature sound will be included in this.

Last year the Coalition for Better Adverts took out extensive research on user experiences with desktop and mobile advertising which involved more than 40,000 consumers across Europe and North America. The results helped identify the ads that fell under the threshold of consumer acceptability.

The research led Chrome to take the necessary steps to protect users from the intrusive ads highlighted by the Better Ads Standards. The aim of this is to minimise these type of adverts and make website owners stop using them.

The way the Ad filter will work is by using the EasyList which is a database of ad-related URL patterns. The database contains a variation of the URL patterns which are highlighted during the scan that Chrome will run in order to improve the user experience. The list itself does actually contain elements which look at Google’s own platform including; AdSense & DoubleClick.

Below you can see the adverts which will be blocked for Chrome users on desktop and mobile. It’s clear to see that Google is being very aggressive towards the adverts displayed on mobile devices.

Google will be notifying sites using these types of adverts and giving them a chance to remove them. Website owners will either be given a pass, warning fail status. Using the Ad Experience Report in Search Console publishers can find a detailed report which will show violations that don’t comply with the Better Ads Standards. After the site owner has fixed the issues they can request for their site to be re-reviewed so they can gain a pass. If owners ignore the warnings Chrome will block the adverts after 30 days.

You’ll find more information about the AdWords Experience report in our ‘Smart Display Ads’ post from June 2017 here (note ‘Google AdWords’ is now called ‘Google Ads’). You might find that this news is not new, but an evolution of predefined architecture that Google has been planning for a long time now. Since Google now needs to be seen to act responsibly with both the activity within Paid advertising campaigns, but also respecting the visitor’s journey on the website they have arrived at.

Why Is Ad Blocking Happening?

Back in 2017, Google were handed a hefty fine in June due to misconduct and it looks as though Google are taking the situation very seriously and reverting back to its purist mindset to refresh general opinions of the services provided. 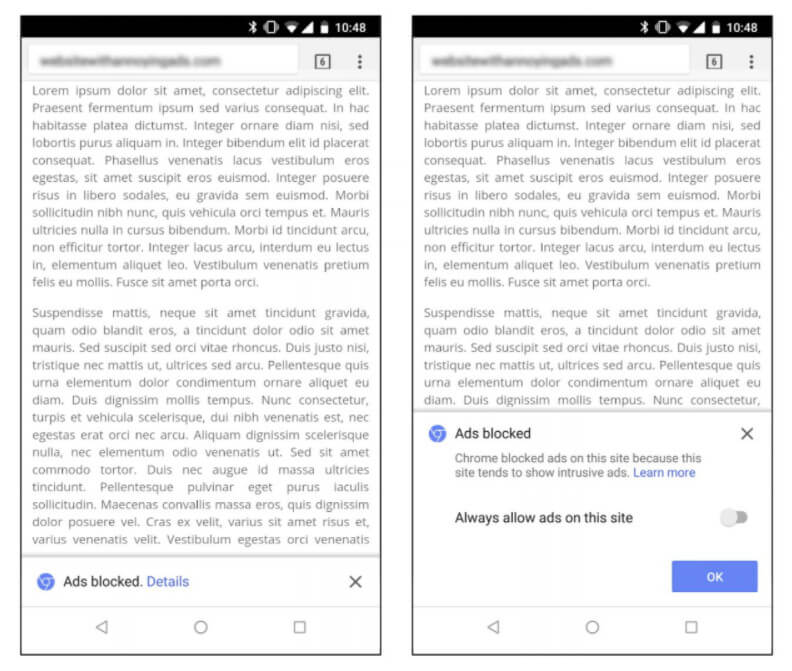 For users, the ad blocker will be shown within the address bar on desktop devices and on mobile you will see a prompt screen (see image above) which will alert you that adverts are being blocked. If you are unopposed to adverts, fear not, you will have the option to unblock them.

Chris Bentzel, Google’s Engineer Manager says “Our goal is not to filter any ads at all but to improve the experience for all web users”. This is a good reminder that Google values their users and are taking steps to lead the way in setting the right standard for customer journeys and user experience in general.

Nearly 42% of websites that were failing the Better Ads Standards have already taken action to resolve the issues, which means the ad blocker is already having a positive effect and benefiting users.

The move to a reduced advert structure based on user choices is evidently a move toward the GDPR restrictions, and with this we also know that Google is rolling out the option of being removed from ‘Remarketing’ advert lists, this can be useful for some but could lead to a change in New vs Returning activity on the majority of sites that adopt this kind of ad placements. We all know how disrupting it can be trying to read an article or browse a website looking to purchase, constantly being followed by adverts of sites you have previously visited.

This is why it is more important than ever to reconsider the USP’s on image adverts and utilise the space to communicate an honest and relevant message to your visitors.

At Brave, we work responsibly to make sure our clients customers get the right information in a relative and descriptive format, alongside purposed imagery.

Hi there, I’m Sian, the Business Operation Manager here at Brave Agency. I have a tonne of experience in business management and marketing which I hope to share a little bit of that knowledge with you guys.

Why It’s Important to Review Your Marketing Strategy

In the world of marketing and branding, the goalposts are always moving. From new algorithms to new research and tools, marketing professionals and business owners are constantly challenged to quickly adapt to make the most out of a marketing strategy. An effective strategy works as a map, guiding your activities and providing you with benchmarks …

What Is Social Commerce And How Could It Impact Your Brand?

From the second the government announced that non-essential brick-and-mortars had to close their storefronts to help enforce social distancing at the start of the pandemic, it literally ground businesses to a halt. Due to this, online shopping saw one of the biggest usage increases in its history. As a business owner, you need to make …