3 Digital Marketing Trends That Will Dominate 2017

We are now less than 50 days away from the New Year and Social Media has made it very clear that it’s here to stay – the fact is, it keeps evolving and responding to new tech, constantly exceeding user’s expectations.

So what does Social Media have in store for us Digital Marketers in 2017?

Snap Inc., previously called SnapChat, has undergone an enormous evolution this year, and as a young player up against the dominant and long-standing Zuckerberg, they’ve set major trends in the Social Media Marketing world. In fact, everyone else is scurrying to keep up. From helping to bring back a more moment-focused view of communications all the way up to live content, it has facilitated more mobile-centric app developments.

To top it off, with their latest venture is the long-awaited smart glasses, Spectacles. It’s the counterpunch we were waiting for after Instagram launched Stories. Spectacles allows users to record and upload videos and photos directly to Snap.

Spectacles will initially come in three different colours – black, teal and coral. If you’re lucky enough to live in the US, you can buy them from vending machines called Snapbots.

Snap has proven to be innovative – they’ve brought us Stories, Lenses and now Spectacles. If they can keep bringing out fresh ideas like these in 2017, it will definitely keep them front of mind.

Twitter has been making headlines but for all the wrong reasons. From an engagement point of view, the platform is staying fairly flat while Facebook continues to grow. Of course, it’s still one of the largest Social Media platforms with 300,000,000 million active monthly users, but as its competitors move along and ahead with the times, releasing innovative after innovative ideas Twitter along remains at a standstill. What has Twitter done apart from changing the Favourites to Likes? Will the app survive another year? It most probably will but its decline is apparent and very real, and if it can’t offer any fresh and new ideas then it’s demise may be a lot closer than we think.

The table below shows you the monthly active number of monthly users for Twitter from 2010 to 2016. As you can see, the trend has levelled off considerably, with a lack of new users meaning that growth seems to be stagnating. 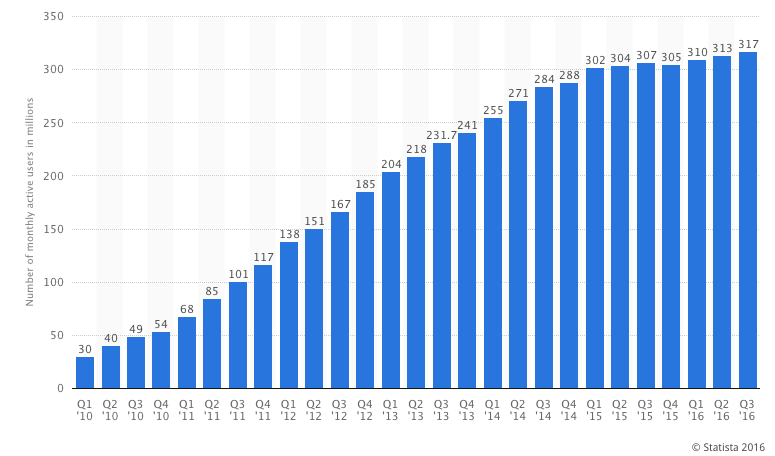 As Social Platforms and brands begin to cater to users more specifically and individually by providing them with content they want to see, we’re able to see a swift decline of Organic Visibility and an increase in Paid Advertising. This trend was confirmed with the recent updates from Google who now display less organic search results per page than before (see here).

When we look at Facebook, organic reach is down by over 52% (see here).

This continuous pressure on brands to remain relevant and number one has forced Social Platforms to come up with new innovate advertising options for brands. Take a look at YouTube, for example, who now use Google Merchant Centre Ads below their videos. Or you could even look at Google’s cross-device tracking – which means that if you browse a store on your Desktop while logged into your Google account you should, later on, see Remarketing ads on your mobile or tablet device.

As brands come and go, this coming new year will be all about the survival of the fittest. Those who have the most to offer and are able to come up with fresh new innovative ideas will be the ones with brands fighting to have their ads on that platform.

What else do you expect to see in 2017? What are your predictions?